Here's 3 soup recipes for the fall that are really tasty and easy to make. I've got a roasted butternut squash recipe, easy lentil soup recipe, and Dessi's famous spinach and quinoa soup recipe. 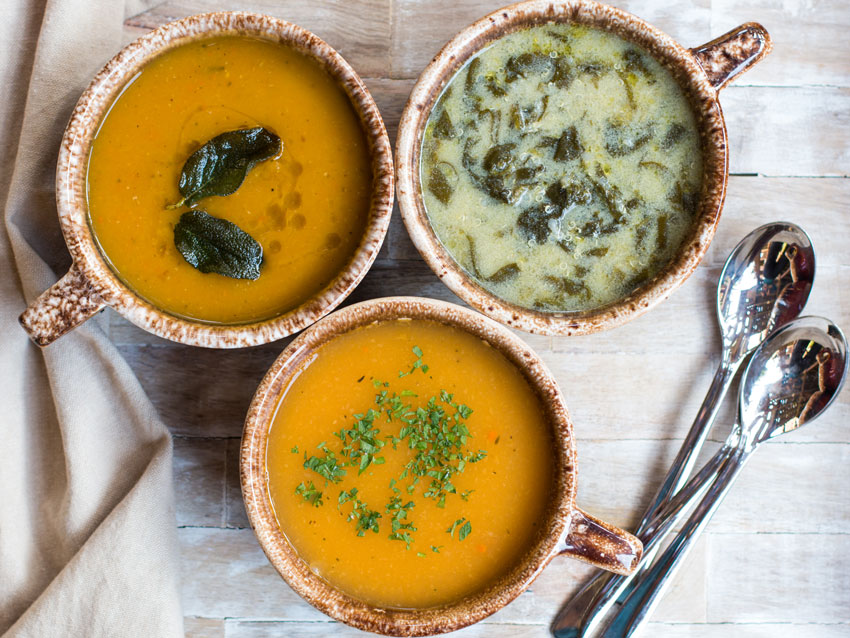 Three soup recipes for the fall

Fall is the season for soups, but in our house we eat them year round. It’s cold here in Chicago almost 6 months out of the year, so nothing feels more comforting than a warm cup of soup. Here are three of my and Dessi’s favorite recipes for soups: butternut squash soup, lentil soup and quinoa lemon spinach soup. I have a few more fall soups like my roasted tomato basil soup, roasted pumpkin soup, and creamy potato leek soup, so be sure to check them out!

This butternut squash soup is one of my all time favorites. It has all those fall flavors like maple syrup, sage, and tons of veggies. The key to making this butternut squash soup next level is roasting the squash (see below how I do that). In the meantime, I saute a hole bunch of finely chopped onions, carrots, and celery in a soup pot. Once the veggies have softened I add some chopped garlic, and a little splash of vinegar to cut through the richness. Then I add some chopped fresh sage and a little bit of maple syrup to reinforce those fall flavors.

Once the squash is roasted, I add it to the pot along with a quart and a half of chicken stock or veggie stock. If you don’t have stock you can use water, but the stock will add more flavor. Let the soup simmer for 35 minutes and then blend it with a stick blender to make it creamy. This roasted butternut squash soup gets even better the second and third day, so make sure to make big batch of it!

How to Roast Butternut Squash?

I first safely cut the butternut squash in two with a knife and a rolling pin (see how I do that in the video), peel it, scoop out the seeds, and then chop it into large cubes. Then I add the chopped pieces to a sheet pan and season them with a couple of teaspoons of oil, a teaspoon of salt, and a few cracks of black pepper. Then I roast them in a 425 degree F degree oven for 25-30 minutes. You can turn on the broiler for a few minutes at the end to get a nice toasty color on the squash.

Dessi recently came up with this delicious quinoa spinach soup recipe. It is similar to a Bulgarian spinach soup, but she replaced the traditional rice in it with quinoa. This soup only has 4 ingredients and cannot be easier to make. Bring a pot of water to a boil and add  about 12 oz of spinach, pinch of salt, crack of pepper and a little bit of olive oil. Sometimes, I use both kale and spinach – it’s even more heartier and nutritious.  Let it simmer for 2o minutes and then add the quinoa. Simmer for another 15-20 minutes and then it’s time for the egg lemon sauce.

The egg lemon sauce is very traditional in Bulgaria and is typically added to spinach, chicken, or meatball soups. Typically it’s made with eggs, yogurt and lemon, but for this recipe we are keeping it vegan and just doing eggs and lemon. Whisk 2 eggs with the juice of one lemon and then temper the mixture by slowly adding hot soup to it until the eggs are completely tempered. Then you can add it to the hot soup which has been taken off the heat. This technique will prevent the eggs from scrambling. The egg lemon sauce will add some creaminess and acidity to the soup to round off the flavors.

How Long to Boil Quinoa?

I typically boil quinoa for about 15-20 minutes. You’ll know the quinoa is cooked when the seeds start to look plump and unravel. I boil quinoa almost every morning and then drain it and make my breakfast bowl with it.

This lentil soup also comes from Dessi’s arsenal of recipes. This is how it is traditionally made in Bulgaria. Bring a pot of water to a boil and add a cup of lentils. I used yellow lentils in this recipe, but you can use green or black lentils. To that add a roughly chopped carrot, a large potato, and 5 cloves of garlic. I really like how the flavors of the lentils and garlic come together, and that’s why I avoid adding onions to the soup as the onions will overpower the rest of the flavors. That’s the reason I avoid using it in the quinoa spinach soup as well. For some additional flavor I also add some sweet paprika and dried thyme. Then I season it with salt, pepper, and a little bit of olive oil. I let that simmer for 25 minutes.

Once the lentils are fully cooked, I fish out the carrots, the potato, and the garlic, add some broth to them, and blend them with a stick blender. Then I add that back to the soup. This adds a nice creaminess to the soup without using flour or dairy.

Be sure to check out a few more delicious soup recipes:

3 Soups For The Fall

Here are three of my favorite soups: my hearty roasted butternut squash, then a lemony spinach quinoa soup and a lentil vegetable soup. These soups are so flavorful, comforting and tasty and most of all super easy to make!

For the butternut squash soup:

For the spinach quinoa soup:

For the lentil soup:

Macros per serving of butternut squash soup:
157 calories
4.6 grams of fat
25 grams of carbs
3.5 grams of protein
6.8 grams of fiber 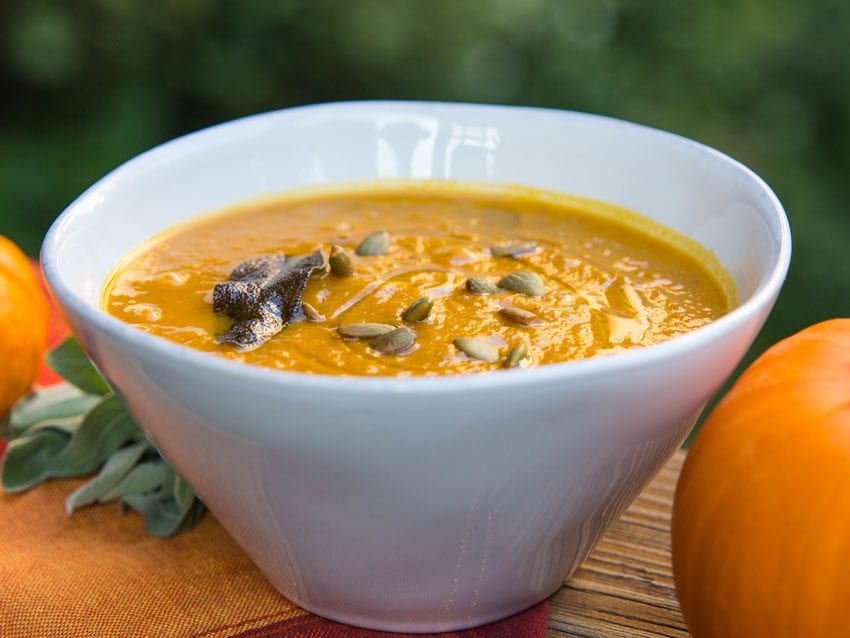 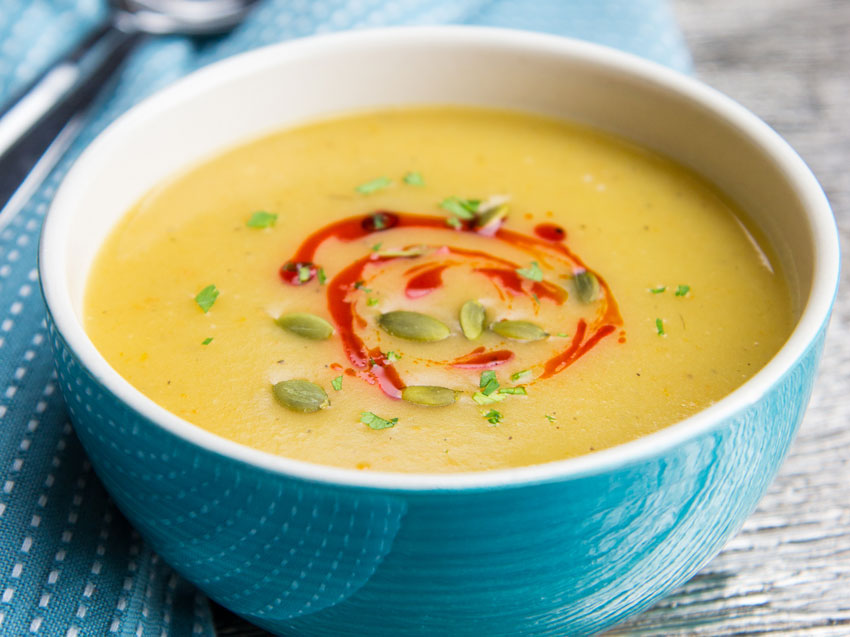 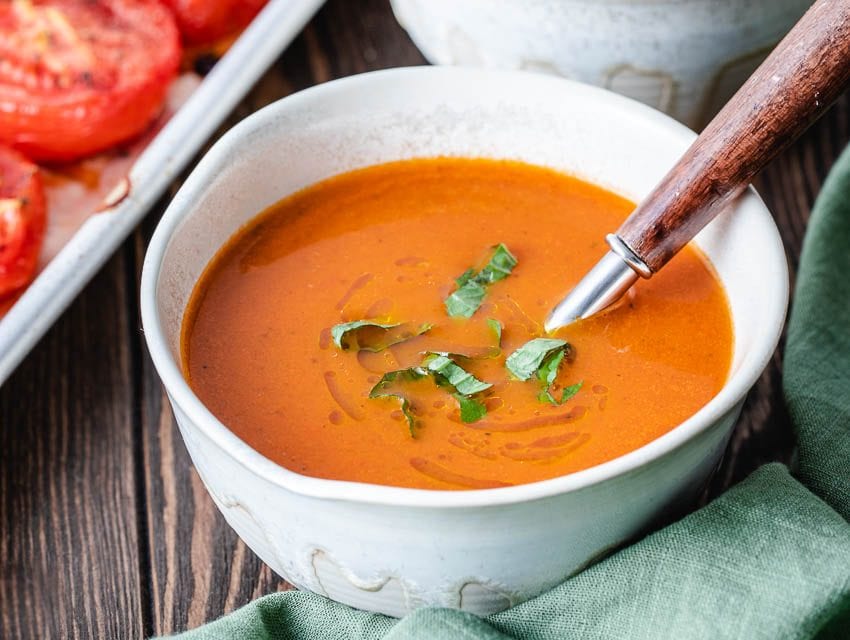